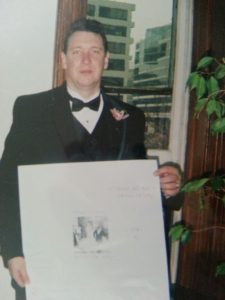 Len Reynolds is a resident of Lake County who graduated from Morton High School. He attended Southern College in Orlando, Florida, pursuing a business management and paralegal degree. He moved back to Lake County Indiana with his two children in 1990 to care for his sick mother.

After many years of witness to miraculous stories of life, Len attended a Lake County Right to Life meeting in Griffith, which reignited his passion for life. Len served the next several years working as a public affairs representative for the Traditional Values Coalition in Washington D.C., and as chairman and vice-chairman of the Christian Coalition of Lake County. Len returned to Lake County Right to Life in the summer of 2009. He was elected president in 2010, and has since then been re-elected twice. Len’s passion for life and fearless pursuit of the truth lead him to be named the recipient of the Dr. Kelly award in 2011.

Len leads a diverse and ecumenical board that focuses on uniting those of different faiths and social backgrounds through their love for life to further Lake County’s grassroots network and pride for the pro-life cause.

It is under Len’s leadership that Lake County Right to Life initiated an effort to investigate a local abortionist and his three clinics across Northern Indiana. Due to the passionate unyielding will of the vice-president Lynne Scherschel, the abortionist lost his license to perform abortions in all three clinics and witnessed the closing of two of the clinics.

Len believes, as so many other inspirational pro-life leaders believe, that education is what will ultimately bring Lake County’s love and respect for life back again. He truly believes that when people fully understand the horrors of abortion, human trafficking, euthanasia and other practices that destroy life, their hearts will no longer support it under any circumstance. Len employs fresh, new ways to talk about the value of life, science, and the authentic dignity of women and men.

We use cookies to ensure that we give you the best experience on our website. If you continue to use this site we will assume that you are happy with it.OkNo Thanks!Privacy policy