The audience erupted in applause on the evening of Friday, June 30, 2017, in response to a private screening of the film Gosnell at the 2017 National Right to Life Convention (NRLC) in Milwaukee, Wisconsin.  The film about convicted abortionist Kermit Gosnell was, for many, the pinnacle of the annual event, which was held this year at the Hyatt Regency.

Producer Ann McElhinney has relied solely on the financial support of the pro-life community to keep the film alive.  “You are my rock stars,” she told the NRLC audience. McElhinney, who was one of many prominent pro-life speakers in attendance, further discussed the gruesome details surrounding the case and emphasized the need for people to see and support the film. “The culture is dominated by death,” McElhinney said. “We will get this film out. It will happen.” Its potential release next year could prove a pivotal moment in the fight for life.

Lake County Right to Life joined its many affiliates across the nation as part of a three-day collaboration to celebrate and strategize pro-life work.  The event took place June 29 –July 1, 2017.

Topics addressed included legislative goals, personal testimonies, and the growing threat of legalizing euthanasia, or what many falsely refer to as “death with dignity.”  Participants also had the opportunity to enhance their skills and knowledge by learning from experts on a particular subject.   Branding, lobbying, and social media usage were just some of the topics discussed in the many workshops held to better equip those who are on the front lines everyday fighting for life.

The convention was a refuge for those who have given their tireless efforts during the past year in the fight for restoring the sanctity of human life. It was a recharge for those suffering from battle fatigue from the never-ending responsibilities placed before them.  It also served as a reminder that to be “pro-life” does not stop at the womb, but rather, it extends all the way to the grave. We are all vulnerable in a culture that does not value life.  NRLC 2017 embodied all of this, living up to its theme of “Keeping Tomorrow Alive.” 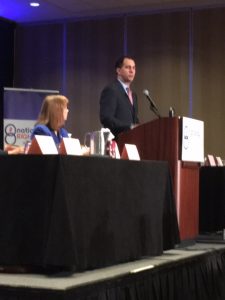 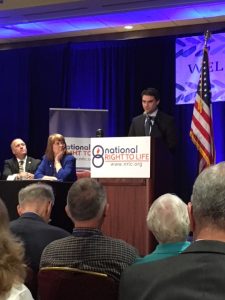